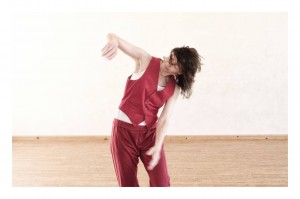 In this workshop we will be making connections between the areas of the technical work through Skinner Releasing and the (instant) choreographic work. The workshop moves into the depth of the body as well as the depth of the making, involving ﬁerce and ﬁne listening, detailed and raw risk. We will tune into the experience of space inside the dancing self and its relation to the space of time in composing instantly. The moment of resonance at the end of a phrase and of expectation before a new phrase. A moment full of potential.
Listening, phrasing, beginnings, endings, resonance.
Space, time, space of time.
How do we relate to each other in this moment. What choices can we make? What do we listen to? There is space for solos, duos and groups in the making.

Skinner Releasing Technique (SRT)™
is an innovative approach to dance and movement training, developed by Joan Skinner. It is designed to ease tension by promoting effortless moving and integrated dynamic alignment of the whole self. The teaching strongly draws on guided imagery and hands-on partner studies, supporting an experiential understanding of both the technical and the creative process in movement. There is an ongoing ﬁne tuning in allowing ourselves to consciously fall into unknown creative territories. It engages many layers that are involved when we dance and create, inside as well as outside. Softening, noticing and allowing are some of the main areas of practice in Skinner Releasing (other than release), that support action into newness. Softening supports the releasing of strength through efﬁciency and responsiveness. Allowing encourages listening, to one’s own dancing ﬁrst. This way we can become more available. In the technical work and in creating dances, directing and allowing are side by side, as are stillness and action, receptivity and ﬁerceness.

For registrations write to: