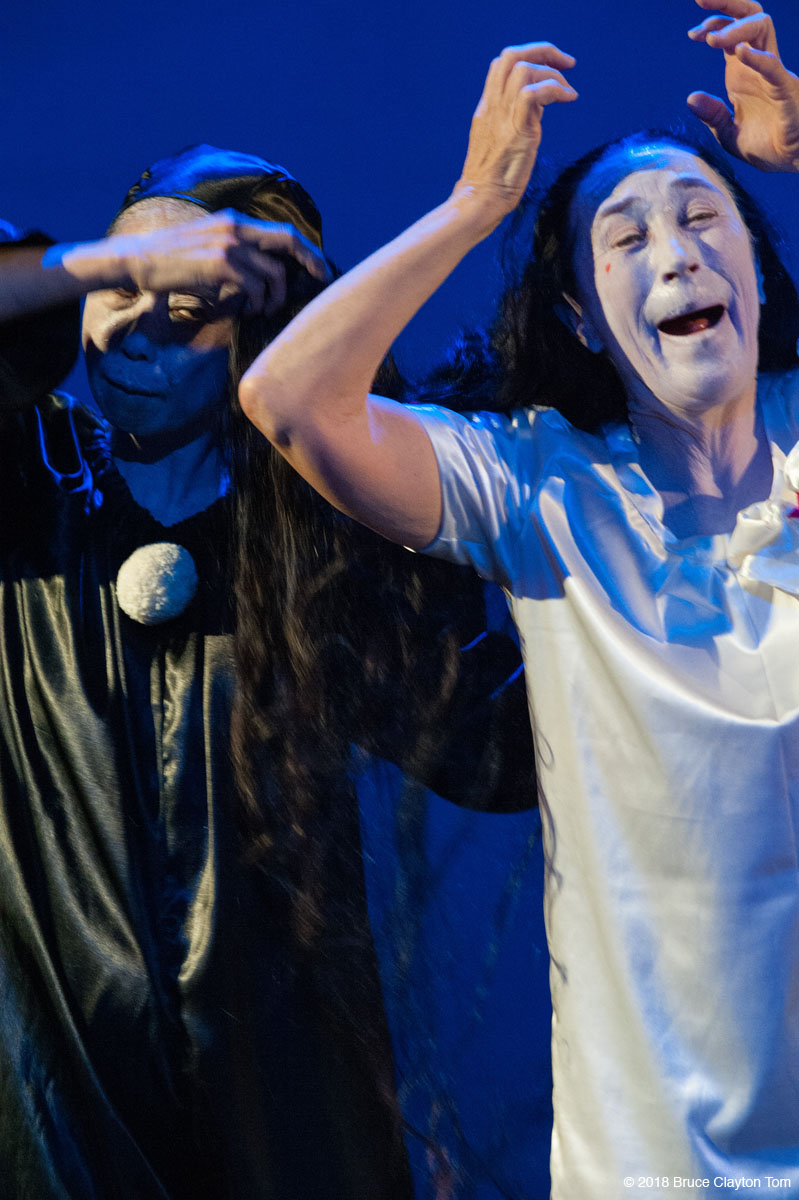 with  Joan Laage and Maruska Ronchi

This duo is inspired by the Comedia dell’arte figure Pierrot and by the physicality of Charlie Chaplin, Buster Keaton and circus performers.

Joan Laage (Kogut) studied under butoh masters Kazuo Ohno and Yoko Ashikawa and performed with Ashikawa’s group Gnome in Japan in the late 80s, and more recently, has enjoyed training with Atsushi Takenouchi. After settling in Seattle in 1990, she formed Dappin’ Butoh, a company known for its appearances in Seattle’s fringe theater and dance festivals. Joan has performed and taught at national and international butoh and dance festivals, and was a featured artist at the UCLA Butoh Symposium in May 2011, and has been an adjunct faculty at Cornish College of The Arts (Seattle). She is featured in Dancing Into Darkness: Butoh, Zen, And Japan and Butoh: Metamorphic Dance and Global Alchemy by Sondra Horton Fraleigh. She performs frequently at the Seattle Japanese Garden where she is a docent. Joan is a founding member of DAIPANbutoh Collective which produces an annual butoh festival in Seattle. During her 2018 March/April Europe tour, Joan will share her art and philosophy in England, Poland, Italy, and Norway. This spring will be her fourth time to teach and perform at Spazio NU.

Maruska Ronchi is an Italian dancer, choreographer and performer.
For many years she worked with Italian and French theatre companies, and contemporary dance companies and different choreographers (Tino Sehgal, Benoit Lahambre), turning around Europe, Russia, Canada and Japan.
In the mainwhile she create her own choreographic works in collaboration with other artists, dancers, and musicians. Always researching new way to developpe the creative process.
She had many different experience of dance, somatic practice, mixing art with video, music, street performances, collaborating with many artist.
Lastly she devote hereself deeply to butoh dance, a Japanese avant-gard contemporary dance, finding in this artistic practice a new inspiration and new way to understand dance process, like an alchemical process, creating her own butoh  performances, in solo and in collaboration with other artists.
She has been invited like artist, dancing in many different places and festivals in different countries in Europe, Canada and Japan.
Graduated in Contemporary Dance at CIMD (International Center of Movement and Dance) in Milan directed byFranca Ferrari. She met butoh dance with Atsushi Takenouchi in 2009. Then she continue deepening into Butoh throught the meeting with many butoh dancers, master and choreographer as Yoshito Ohno,Yumiko Yoshioka, Carlotta Ikeda, Natsu Nakajima, Ima Tenko, Imre Thormann, Masaki Iwana, Minako Seki,  Sankai Yuku, Yukio Mikami (Torifune Butoh Sha), Yuri Nagaoka & Seisaku, and others.